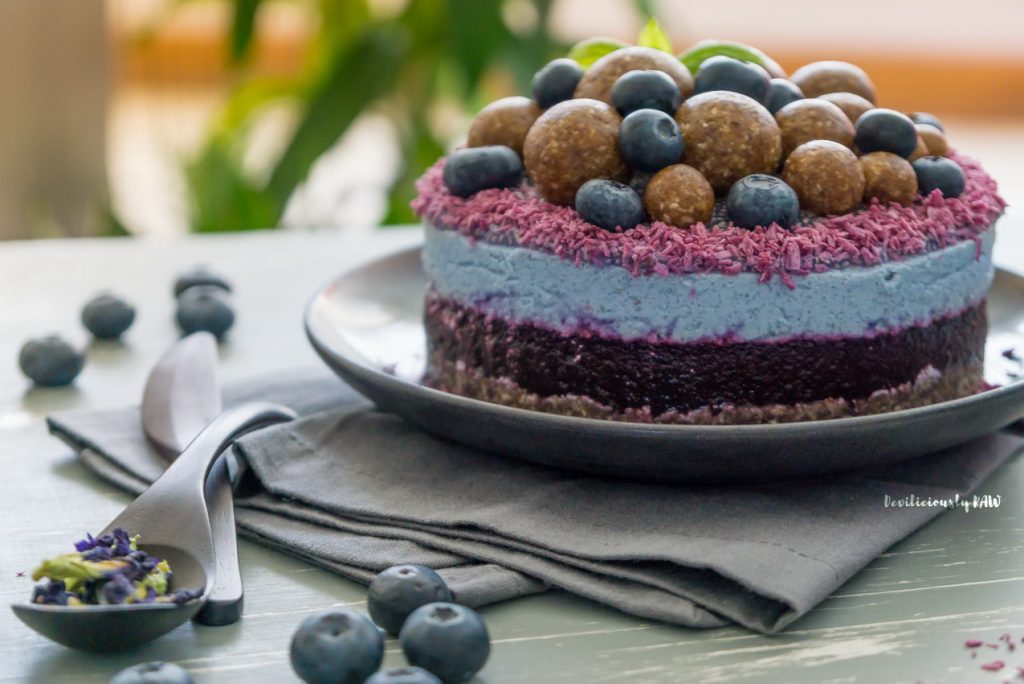 I’ve made several Raw Vegan Cheesecake, but this one is the best so far I’ve had! The combination of wild blueberries and lemon is simply delicious.

The inspiration for this cake came from my ⭒✩Beetroot and Raspberry Brownie✩⭒ that are one of the readers’ and mine favorite recipe on the blog, and the ⭒✩Cherry Dream Bars✩⭒ they are so simple and amazing, you must try them out. 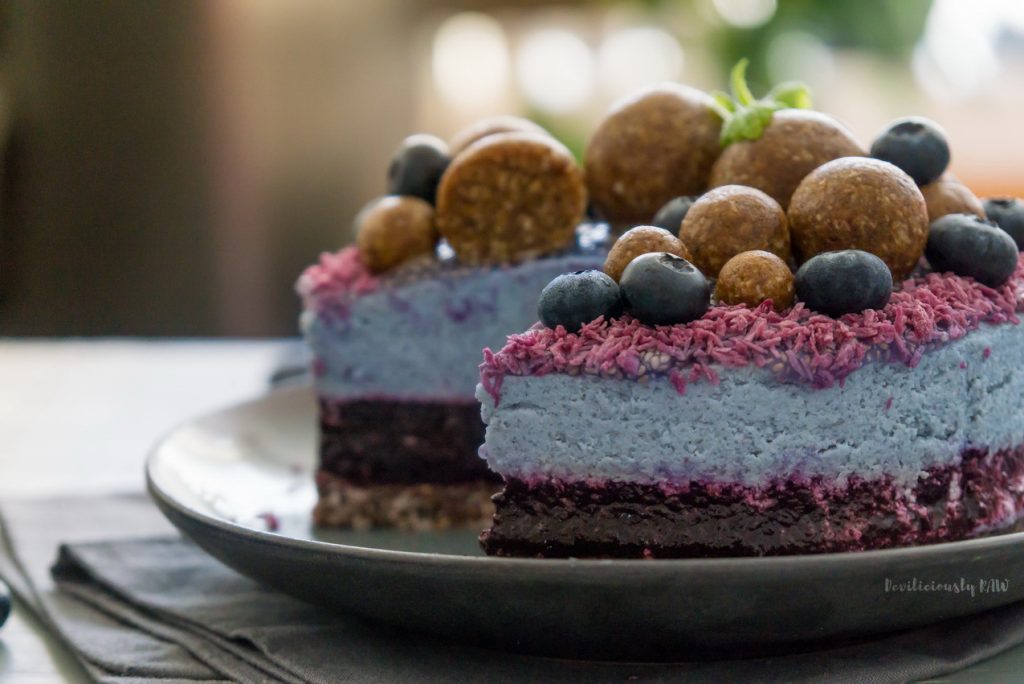 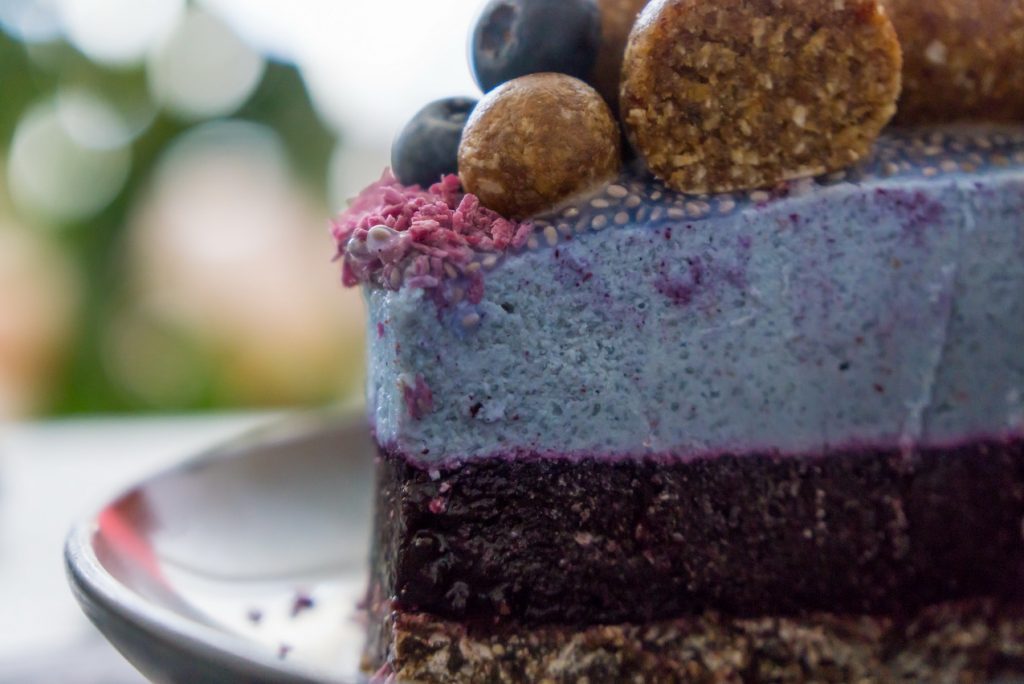 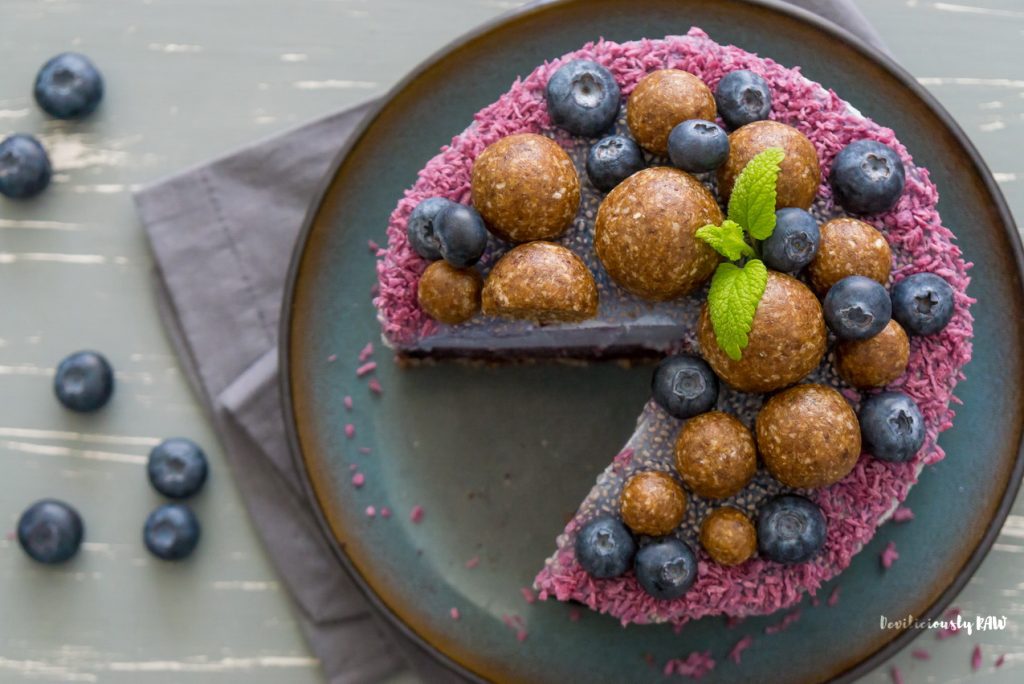 Raw Dessert and Cake recipes relying heavily on dates and nuts. Raw desserts, nutty slices and cakes typically use a base of nuts and dates. The nuts provide bulk and body, the dates serve as a sweet binder. But I always find these raw sweets too nut-heavy for my taste also quite heavy on the stomach, so I lightened up the cashew layer with psyllium husk. It creates a firm texture and it does also to help reducing amount of nut in the recipe because of the water-absorbing ability of psyllium husk. 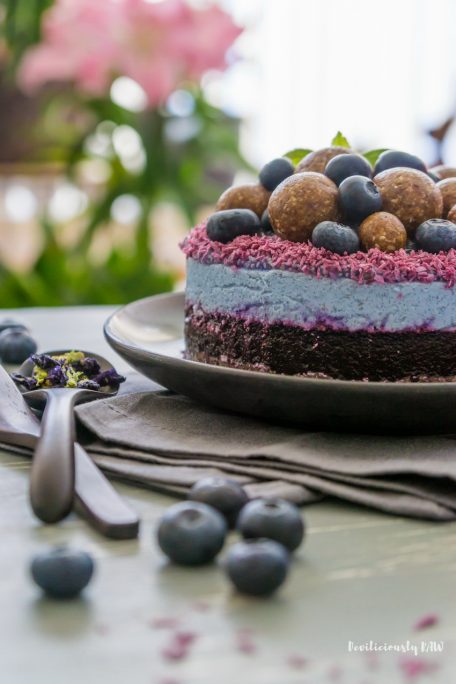 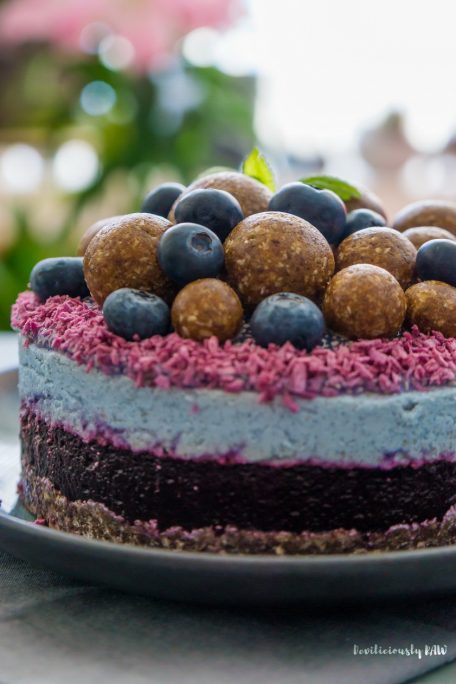 Let’s start with the crust – It’s made of shredded coconut, dates, carob powder and a pinch of salt.

Next the wild blueberry jam layer – It’s made of defrosted wild blueberries, coconut sugar, cinnamon and cloves. I added some lemon juice and zest for a bit of that tartness and freshness, because blueberries and lemon are a match made in heaven.

The second layer – Made from cashews, coconut nectar for sweetness, vanilla, butterfly pea flower tea for it’s gorgeous colors, some coconut milk, coconut oil and psyllium husk – blend it all up and that’s it. Of course, you’ve got to have cashews in a raw vegan cheesecake. Cashews make it super creamy and mousse-y. Lately, however, I have been experimenting with new recipes without or with uses less nuts. This is meant to be helpful to those interested in using less fats.

The cashew layer holds their form quite well due to the help of a little bit of psyllium husk. The psyllium husk gives the mixture a no-bake cheesecake-like texture and it won’t loses its firm texture once defrosted. 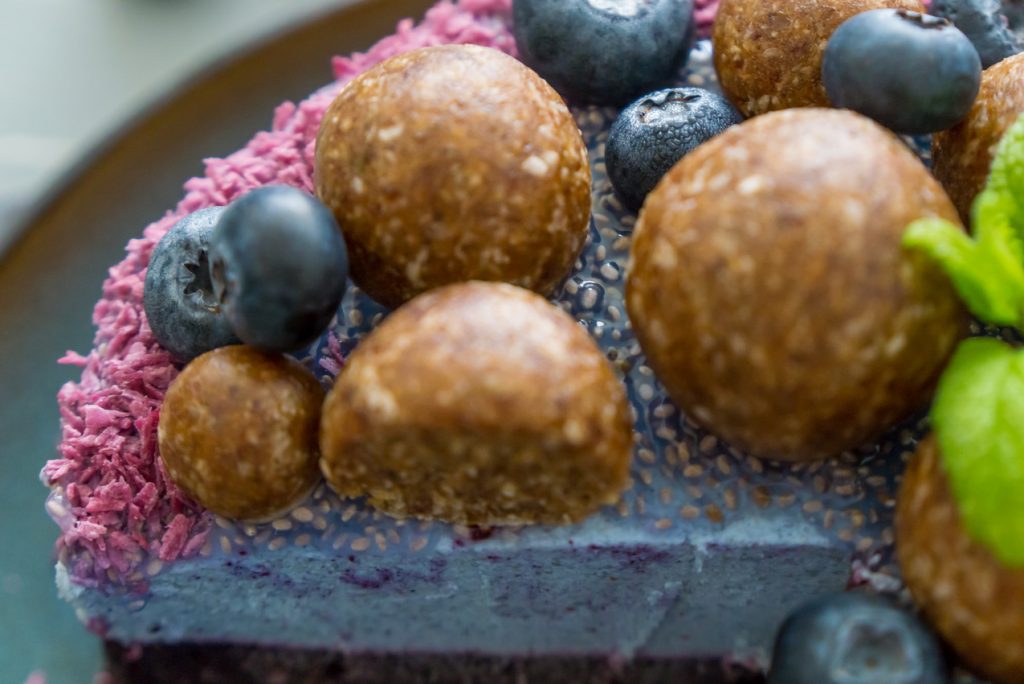 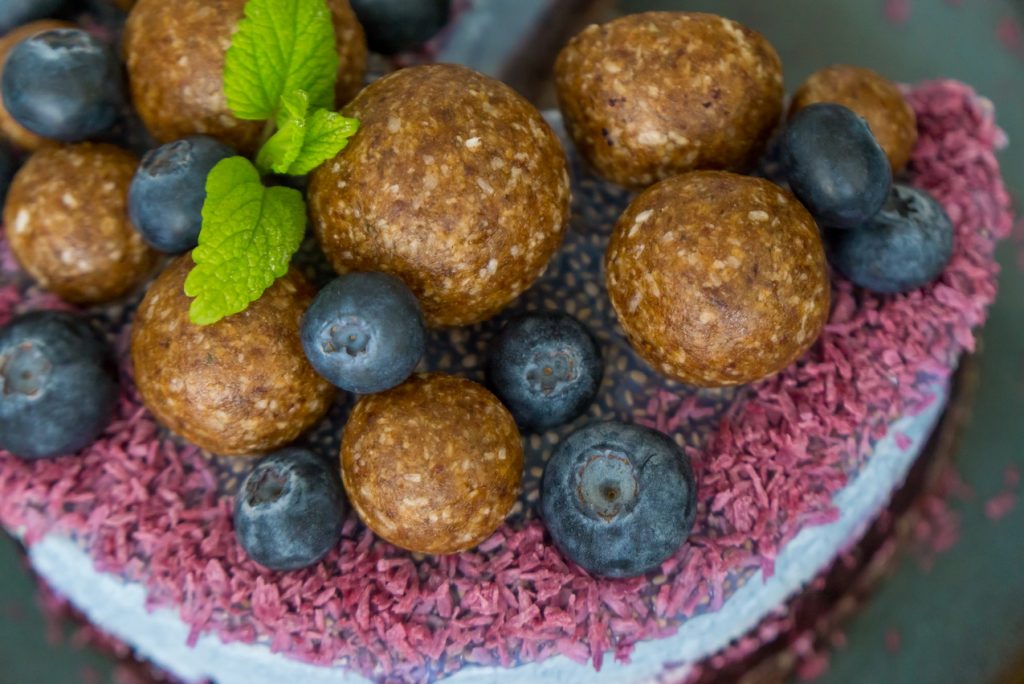 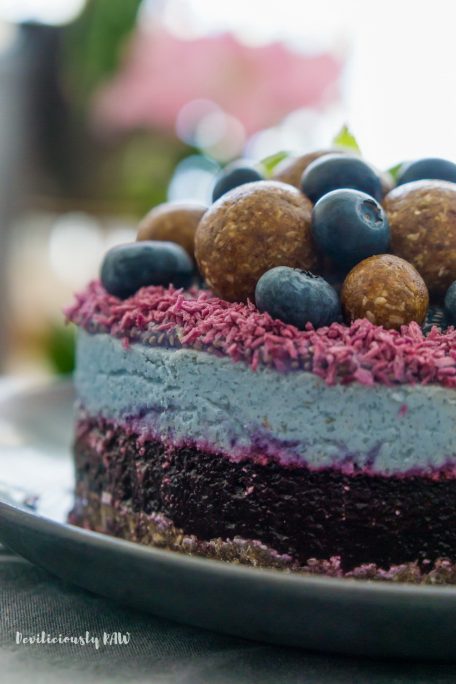 This delicious, refreshing, light Raw Vegan Blueberry Cake gets its natural blue color from Butterfly Pea Tea. This cake is not only incredibly delicious but it's also easy to make.Click To Tweet

Save Print
Prep time
40 mins
Cook time
3 hours
Total time
3 hours 40 mins
Author: Deviliciously Raw
Recipe type: Cake
Cuisine: Raw, Vegan
Serves: 1 Cake
Ingredients
Instructions
Notes
* Keeps well in the refrigerator or freezer, but if you want it to last longer definitely opt for the freezer and allow to thaw before serving. Enjoy♡
** These layers are not in particular order. Next time instead of jam layer on the bottom, I top the base with half of the cashew layer then followed with the jam over it and topped with the remaining cashew layer, I think. Feel free to play around with the layers, decorate if desired or add toppings of choice. 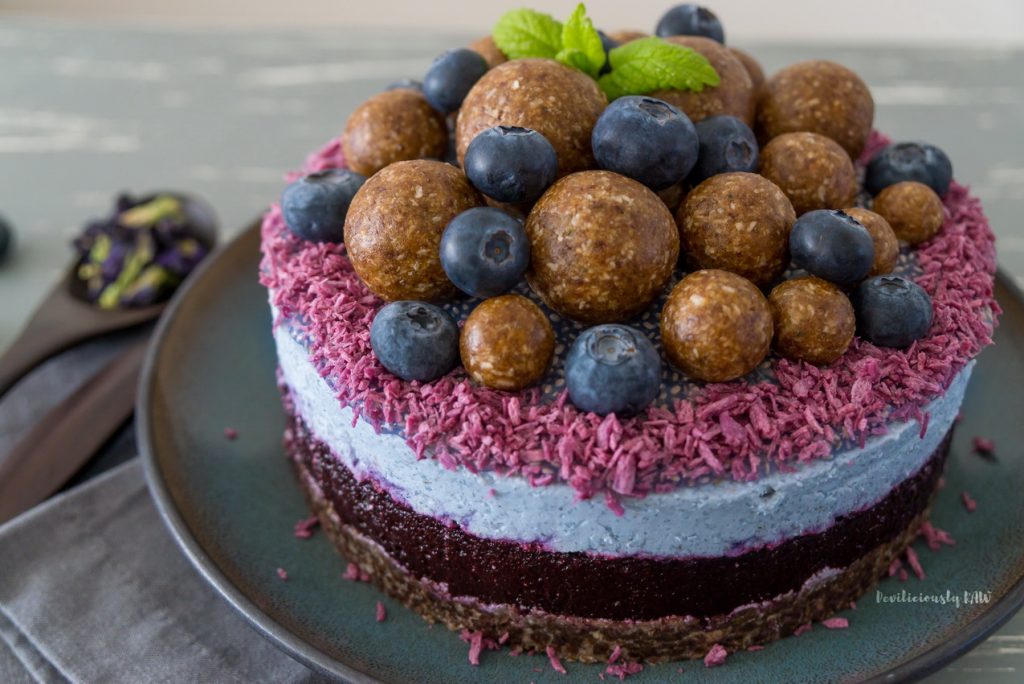 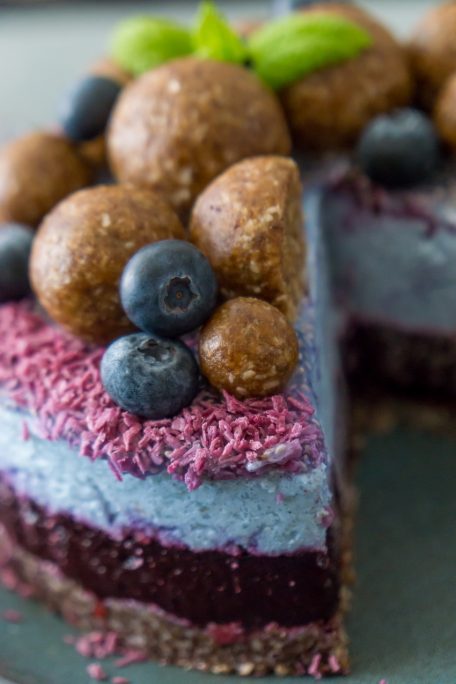 Butterfly pea tea originates from South-East Asia where countries have been drinking a mixture of the butterfly-pea flower and dried lemongrass for centuries. Known for it’s gorgeous colors. Butterfly pea tea (Clitoria ternatea) is a caffeine-free herbal beverage. Aside from its many culinary uses it also has numerous health benefits. When steeped in hot water, the butterfly pea flower turns the water blue. Add in some lemon juice and the blueish tea turns into a dreamy purple.

This raw cinnamon roll cake is totally plant based